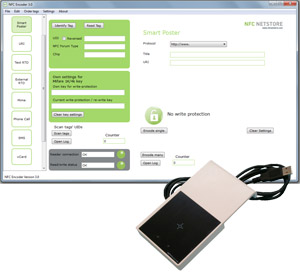 This NFC Tag Encoder System will allow companies the ability to create exciting innovative ways to connect with customers using NFC technology. This System has easy to use Windows based software, a reader hardware read/write device with USB interface and NFC programmable tags.

Excitement is building across industries from the realization of what NFC can provide. The opportunities for new advertising and marketing campaigns and customer driven possibilities are reaching a tipping point.

“We are so pleased to provide this NFC Tag Encoder System to Canada. The demand is growing for more unique ways to engage customers with this technology using a smart mobile device because the possibilities are endless with NFC, said Bob Moroz,” President of RFID Canada.

This NFC Tag Encoding System will allow businesses, marketing companies and research firms the ability to track consumer demands with an easy to use interface. When you have an idea, you can simply create a concept, select an application, and encode a tag, all within minutes. https://rfidcanada.com/products/nfc-encoder-system

About Near Field Communications (NFC)

NFC enabled devices and other devices such as smart phones by Samsung, BB, Nokia, etc. can be paired with NFC tags which can be programmed by NFC apps or NFC tag encoder software to automate tasks. This action allows for a change of phone settings, a text to be created and sent, launch an app, or any number of commands to be executed, limited only by the tag program and other apps on the smartphone.

Based on the latest numbers from ComScore, 15.6% of Canadian smartphones are already NFC-enabled. Juniper Research suggests that 1 in 5 smartphones will have NFC by 2014.

The software, which operates under Windows XP/2000/Vista/W7, will read, write and write-protect NFC compatible tags and scan the tags’ UIDs.

The system is compatible with the following tag types:

With 25 plus years of industry knowledge and understanding the development of specialized solutions for companies across diverse markets and applications. RFID Canada has successfully implemented applications in Animal Identification, Document Tracking, Traceability, Asset Tracking, Work-in-Process, Stock Replenishment, Personal Identification, and Sporting Events in a wide range of industries including Agriculture, Manufacturing, Transportation, Supply Chain and Distribution, Retail, Healthcare, Pharmaceutical, Libraries, Government and many others.