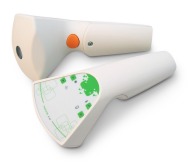 The PT2SCAN scanners are dual technology Scanners, RFID HF/NFC and Barcode Scanning suitable for commercial and industrial use. Three models are available RFID HF/NFC only, RFID HF/NFC with 1D Laser and RFID HF/NFC with 2D Imager. They are compact and lightweight, ergonomically designed for easy and immediate use, without the need of special settings and calibrations. With the software provided they can also be configured and customized.

The features are a single push button, 4 led, one buzzer and one vibrating motor for its control and use. Simplicity is the fundamental characteristic of the PT2SCAN scanners, which makes them ideal even for the most mundane tasks. Features a backup and tamper-proof real time clock, which if required, can time stamp each transaction.

It is possible to reprogram the STAND ALONE functionally using the utility software.